The bull market which began in March 2009 is now officially 5 years old. The first quarter began with investors concerned about slowing growth in emerging markets and the effects of the Fed slowing down the easy monetary policy. After taking a breather from last year and dropping nearly 6%, the S&P 500 rebounded to once again hit new all-time highs during the quarter, ending up 1.8%1.

These recent fears about slowing growth in emerging markets, combined with company specific issues, have caused Coca-Cola, in our opinion, to appear very attractive at these prices.

Coke may be losing its fizz, but not its dominance

Health related concerns about soda being linked to obesity, heart disease, and diabetes have led to a corresponding decline in sales of carbonated soft drinks (CSD) in North America, particularly in diet soda (near a 7% decline last year), putting pressure on Coca-Cola’s stock price.

Despite the North American CSD weakness, Coke continues to expand with volume growth in emerging markets such as Latin America, India, China and Africa. In fact, 80% of their profit stems from international markets in over 200 countries around the world. They are the largest beverage company in the world with ownership in 4 of the world’s top 5 carbonated beverage brands (Coca-Cola, Diet Coke, Fanta, and Sprite).

Even if one were to assume the declining consumption pattern in the U.S. is indicative of the future habit pattern in the entire world, Coke is essentially delivering liquid to the world, with 1.9 billion servings per day. They also own the following brands: Dasani, Vitamin Water, Smart Water, Evian, Minute Maid, Simply Orange, Powerade, Nestea, and many others.

This change in consumption pattern for healthier alternatives has been ongoing for quite some time now in the beverage industry and Coke has navigated this change nicely. Stills only accounted for 11% of global beverage volume sales in 2000 and now they account for 26%. And should Coke lack in pioneering new innovative drinks, there is some protection afforded in their ability to acquire popular drinks and utilize their massive distribution infrastructure to dramatically increase sales. This means they can appear to overpay and still end up with a decent price tag.

Some have argued that this consumption pattern is a negative mix shift into lower gross margin products amongst stills.  Even if this were true, it appears this negative effect has been offset by scale benefits as evidenced by their stable margins over this time period (excluding the effect from the recent North American bottler acquisition).

From an expected return standpoint, we estimate that Coke is able to convert approximately 80% of their consistent earnings stream into free cash to the shareholders.  With Coke projected to earn $2.13/share over the next 12 months and the stock recently trading at $38.66, we believe investing in Coke at this price yields an expected return of 4.4% plus the terminal real growth rate (in other words, volume) plus the inflation rate (in other words, price increases). 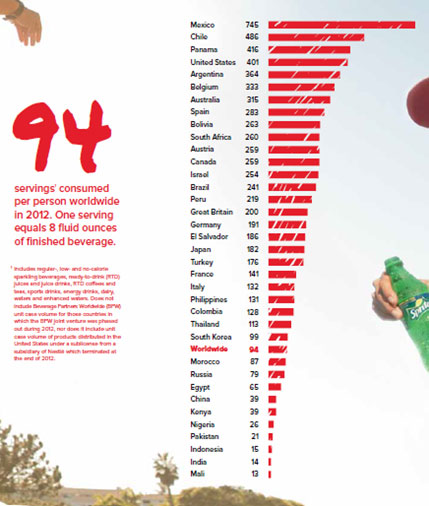 As for real growth expectations, we would expect Coke to grow volume by at least global population growth (1.1%) plus the growth in global consumption per capita of Coke’s products as they penetrate more markets around the world.  For example, worldwide consumption has grown from 43 per capita in 1990 to 94 per capita in 2012, or 3.6% annually (note: the U.S. is about 400/capita). While worldwide consumption grew more quickly in the nineties, Coke has still grown worldwide consumption at 2.7% annually over the past decade even in the face of a declining U.S. CSD market.  Add on 3% per year pricing increases in line with long term inflation (which could be even higher in the future given worldwide debt levels), and we believe Coke is very likely to deliver 10%+ rates of return, which we view as quite favorable given Coke’s historical, and, in our opinion, very likely continued, dominance of the beverage market.

This growth in the face of domestic decline due to health concerns makes Phillip Morris/Altria a useful case study. There is likely no other product that is more closely linked to health concerns than cigarettes. From 1991-2005, U.S. cigarette consumption declined over 25%; yet, Phillip Morris was still able to grow top line sales at 4% annually over the same time period. 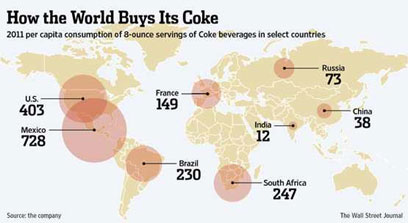 For Coke, enormous growth opportunities still await in places like China (39/person) and India (14/person) where not only do we anticipate per capita consumption to at least approach global per capita consumption (94/person), but we also recognize there is a long runway with each of their populations at 4-4.5 times the size as the U.S.!  In other words, per capita growth in these countries impacts Coke’s bottom line to a much greater degree than other smaller countries.

Thus, despite all the recent struggles in the U.S. and emerging markets, we believe this iconic global brand will continue to dominate.

Despite the market making fresh highs this past quarter, we continue to feel confident in the ability of the companies we own to forge ahead largely independent of macro related issues. This capability is important to us because we recognize our inability to predict the outcomes in the economy. Whether the market zigs or zags, we anticipate the underlying business values of our companies to continue to grow and their stock prices to follow over time. We especially find our estimate of the expected returns of these businesses attractive relative to the alternatives, both within the stock asset class and other asset classes. So long as we can find satisfactory expected returns, we will remain invested. Meanwhile, we will continue to be patient and objective as we diligently seek out the best risk-adjusted expected returns.

Thank you for your continued trust and confidence,

Disclaimer: The specific securities identified and discussed should not be considered a recommendation to purchase or sell any particular security. Rather, this commentary is presented solely for the purpose of illustrating YCG’s investment approach. These commentaries contain our views and opinions at the time such commentaries were written and are subject to change thereafter. The securities discussed do not represent an account’s entire portfolio and in the aggregate may represent only a small percentage of an account’s portfolio holdings. These commentaries may include “forward looking statements” which may or may not be accurate in the long-term. It should not be assumed that any of the securities transactions or holdings discussed were or will prove to be profitable. Past performance is no guarantee of future results.