To the surprise of most market prognosticators, who predicted major declines in a Trump win, the S&P 500 continued its upward march with a 3.82% gain during the fourth quarter.[1] Recognizing the deep complexity of geopolitical, economic, and market forces, we remained agnostic about election-driven market movements. Instead, we focused, as always, on deep fundamental research into individual companies and on the construction of a portfolio that is both robust to a wide variety of economic outcomes and positively exposed to growth in worldwide wealth per capita. While we believe we’ve constructed such a portfolio and thus feel no urgent need to act in response to macro events such as the election, we often find that the frantic, herd-like activity of many market participants in the wake of these events is a source of opportunity for us given our longer term focus. We believe the Republican sweep of the executive and legislative branches has created one of these opportunities by causing an already widely-held viewpoint of U.S. strength and European and emerging markets weakness to become nearly universally-held. The problem with universally-held viewpoints in a system as complex as the stock market is that they are almost always based on narrative fallacies.

A narrative fallacy, as Nassim Nicholas Taleb describes in his book The Black Swan, “addresses our limited ability to look at sequences of facts without weaving an explanation into them, or, equivalently, forcing a logical link, an arrow of relationship upon them. Explanations bind facts together. They make them all the more easily remembered; they help them make more sense. Where this propensity can go wrong is when it increases our impression of understanding.” In the current case of U.S. strength and European and emerging markets weakness, the narrative proceeds roughly as follows:

The “BRICs” are all basket cases. Brazil is incorrigibly corrupt, Russia is far too reliant on oil prices, India has huge potential that it seems to never fully realize, and China is in the middle of a giant property bubble that could burst at any time. The European Union is a failed experiment that, because of free-riding by the weaker member countries, has resulted in structurally low growth and high economic leverage for all countries involved. Furthermore, Brexit may be the beginning of the end of the European Union, and the unwinding of the alliance will prove costly and messy. The U.S., on the other hand, is the largest, most dynamic, and most diversified economy in the world while also possessing the soundest financial footing. Moreover, these advantages are only going to increase over time as the economy strengthens, rates rise, corporate and personal taxes get cut, and infrastructure spending gets completed.

This narrative is simple and compelling, and, at first glance, it appears to explain reality quite well. Furthermore, it just feels right. Thus, to understand why it is probably a fallacy, we must examine a time-period when investors held similarly universal views based on a narrative that subsequently proved fallacious. Fortunately, we have a perfect test case from 2007. In fact, this test case is so perfect that it concerns the exact same topic as the narrative fallacy we’re currently analyzing: the relative positioning of the U.S. versus Europe and the emerging markets. Only, in this case, a mere nine years ago, the universally-held view was the exact opposite of the current dominant narrative.

The majority of investors were negative on the U.S. and positive on the emerging markets. U.S. dominance, the story went, was a thing of the past. The emerging markets had finally unleashed the potential of their massive populations through more capitalistic policies, aggressive infrastructure projects, and much improved education. Emerging markets were so in vogue that they even spawned a new acronym (BRICs[2]) representing the countries that were set to take over the world. Additionally, because of the efficiencies in labor and capital created by closer monetary integration and free movement of people, the European Union was heralded as a huge success, particularly for the smaller participants such as Spain, Ireland, and Greece, all of whom had experienced huge booms since their adoption of the Euro.[3] Advice from the major brokerage houses in response to incipient signs of U.S. economic weakness attests to this narrative. In a September 2006 report, Jim O’Neill, head of economic research at Goldman Sachs, wrote, “Global growth will decouple from U.S. growth to a greater extent than in the past,” and “Domestic demand is on solid footing in Europe, Japan and key emerging markets. The underlying shock driving the U.S. slowdown is not global in nature but is linked to a slowing U.S. housing market.” Analysts at Merrill Lynch agreed, writing, “A sharp slowdown in the U.S. economy in 2007 is unlikely to drag the rest of the global economy down with it. The good news is that there are strong sources of growth outside the U.S. that should prove resilient to a consumer-led U.S. slowdown.”[4] Even Warren Buffett began to make bets on the strength of the rest of the world relative to U.S., including a large trade shorting the dollar in the early to mid-2000s and a sizeable wager on the Brazilian real in 2007.[5]

Having invested during that period, we can attest that the narrative back then felt just as compelling as the one being told today. Yet, as we know, the next nine years surfaced many negatives regarding the emerging markets and Europe and many positives regarding the United States. But how could such an obviously incorrect narrative feel so compelling at the time? The narrative was seductive for a number of reasons. First, it was rooted in fact. While not every statement in the story proved true, many did, and none were obviously false. Second, the narrative did a great job of explaining the outperformance of the emerging markets and Europe over the preceding five years, as shown in the chart below.

Finally, and most psychologically important, it gave investors justification to succumb to the powerful social pressure to join the crowd by chasing the stocks and asset classes that had recently outperformed. This social pressure plus narrative justification explains why market trends are so self-reinforcing and prone to bubbles. In the example of our 2007 test case, early companies and investors in the emerging markets and Europe began to experience large outperformance relative to peers. Over time, these companies and investors attracted more capital and acclaim, assuring them of the wisdom of their initial portfolio weighting. For companies and investors underweight emerging markets and Europe, the experience was the inverse. Through client dissatisfaction, media headlines, and loss in stature, these companies and investors experienced tremendous psychological and social pressure to join the consensus. These factors led to large money flows into the favored asset classes and out of the less favored ones, causing larger and larger relative outperformance and more and more unanimity of opinion. However, whenever a viewpoint becomes unanimous, as seemingly occurred by late 2007, any evidence that deviates from this view can lead to a reversal in the trend, starting the process all over again, as can be seen in the chart below.

Two other charts, shown below, highlight this cyclicality in sentiment even more strikingly. 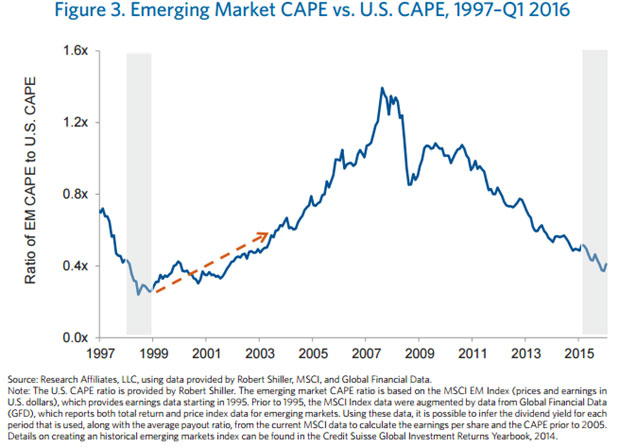 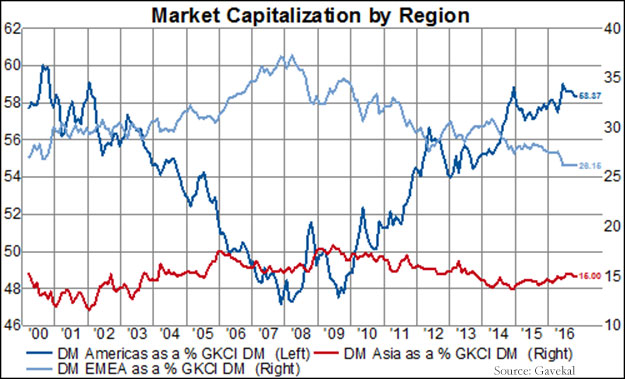 What are we to make of the charts above? The first one shows that U.S. assets have experienced resounding, nine-year outperformance relative to the emerging markets and Europe. The second, a time series comparing cyclically-adjusted price-to-earnings ratios, and third, a time series contrasting the developed world’s market capitalization by region, seem to clearly show that Europe and the emerging markets hit cyclical highs in 2007 and are at cyclical lows today. Moreover, as we mentioned at the beginning of this letter, the narrative justification for this outperformance seems universally-held. All the signals are aligned, and reversion to the mean appears inevitable. However, as we also mentioned at the beginning of this letter, markets are complex. Sometimes they revert to the mean, but sometimes they don’t. Moreover, most of the time, we can’t even tell where the mean is.

Thus, when both sentiment and valuation measures suggest a macroeconomic mispricing, as they do today for the U.S. versus Europe and the emerging markets, we believe the best course of action is as follows: First, we reevaluate our portfolio positioning to make sure it has the potential to produce attractive risk adjusted returns in scenarios in which the U.S. continues to outperform. In this case, we believe it does because of the strength of the business franchises we own, the conservative nature of their leverage, the broad geographic diversification of their cash flows, and the still material exposure of the portfolio to businesses that benefit from rising U.S. interest rates. Second, we search both our existing holdings and our watchlist for companies with attributes counter to the universally-held narrative, and, if the prices are attractive, we increase our positions in these out-of-favor companies, using some of our more expensive and currently fashionable holdings as sources of funds. Thus, in accounts where we believe it’s appropriate, we have trimmed our domestic financial companies and added to some existing and several new multinational holdings with large emerging markets and European divisions.  We believe this measured approach enhances the return potential of our portfolio while protecting our downside if no mean reversion occurs.

In the stock market, certain narratives sometimes achieve such widespread acceptance and seem so glaringly obvious that they become hard to resist. However, upon closer examination and with the benefit of hindsight, many of these narratives turn out to be fallacies. We hope our discussion of the market psychology that leads to such unanimity of opinion and of the tools (valuation data and past salient examples) we use to fight this powerful psychology can serve as an antidote during these time periods. This knowledge certainly serves as one for us, allowing us to confidently stay the course. When combined with our loyal client base and our portfolio of high market share, conservatively levered, diverse businesses, it even allows us to lean against the short-term tide, rebalancing out of our winners and into our losers, and, we believe, increasing our odds of long term investment success. After all, as we observed in the striking re-ascendance of investor enthusiasm for U.S. assets from its 2007 nadir, today’s losers are often tomorrow’s winners.

As always, please feel free to call us with any questions or concerns, and we thank you for your trust.

[1] For information on the performance of our separate account composite strategies, please visit www.ycginvestments.com/performance. For information about your specific account performance, please contact us at (512) 505-2347 or email [email protected]